Mike Duxbury adapts a Minkie to deal with the notoriously difficult problem of pin-fry feeding.

Richard and Colin Bailey chart the evolution of British Columbia's Leech patterns, and the subsequent development of the highly successful 'balanced' Damselfly dressing. ...

From the onset of summer right through until late autumn, Tomas Kolesinskas turns to a Norwegian pattern which sports a green body

In step with the Riverdancer

The Copper Tom is an emerging Tay pattern which bucks the trend on body colour, but still catches the salmon's eye.

Faster currents and deeper lying fish caused Colin MacLeod to experiment this season with a heavier fly based on a Flexi-worm. It has since produced incredible results. 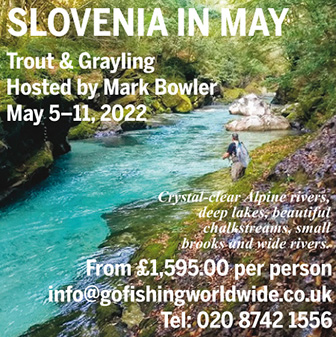