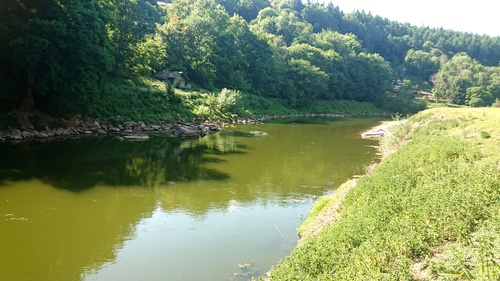 The Wye in summer 2021 turned bright green with algae.

The Environment Agency (EA) has committed to dramatically increase regulatory farm inspection visits in the Wye catchment. The Wye has made the news often recently, especially when the river is low and temperatures are high, when the water tuns bright green with high concentrations of algae.

The issue was highlighted by monitoring work carried out by the Wye Salmon Association and is due to high phosphate levels caused primarily by agricultural run-off, particularly from poultry farms, which have proliferated in the Wye catchment over recent years. As of July 2020, there were 500 farms, managing 1,420 intensive poultry units/sheds, and containing over 44 million birds in the counties of Shropshire, Herefordshire and Powys alone.

The promise of increased farm inspections came at a meeting of representatives from the Angling Trust, Ross-on-Wye Angling Club, Wye Salmon Association, Environment Agency. Four new dedicated Agriculture Regulatory Inspection Officers, appointed by the EA, plan to carry out 150 farm visits in Herefordshire by the end of March, and will have new resources committed for the next three years.
Through new funding, the EA will also monitor soil erosion along river catchments, using remote satellite monitoring, so they will have access to better information and evidence to target problem farms and areas.

At the meeting were three representatives of the EA: Harvey Bradshaw, Executive Director of Environment and Business, John Leyland, Director of Water Quality, and Ken Austin, Deputy Director of Agriculture.

John Cheyne added: “It’s great to see senior staff at the Environment Agency taking the time to engage with anglers and other river users at a grassroots level… Action to change agricultural practices needs to be taken now, and it needs to happen at a catchment level or the river Wye will be at crisis point very soon. This is a rural, agricultural community and nobody wants to see farmers prosecuted, but the work done by the Environment Agency on the river Axe in recent years has proved how effective farm visits can be if they are carried out regularly and by well-trained enforcement staff. Huge improvements were made on the Axe and not one famer was prosecuted”.
EA officers will inspect farms and highlight issues that lead to the pollution and help farmers understand the changes that they need to make. Over the past ten years, the EA have been hamstrung by cuts to their budget, so additional funding being directed to the Wye’s problems represents an encouraging change in direction.

“However this needs to be just the beginning and we will continue to demand that the Government provide the resources and the political will to make the current national shame of river pollution a thing of the past”, said John Cheyne.

The Angling Trust will continue to press the government to properly fund the enforcement of existing laws around agricultural and sewage pollution through its Anglers Against Pollution campaign.