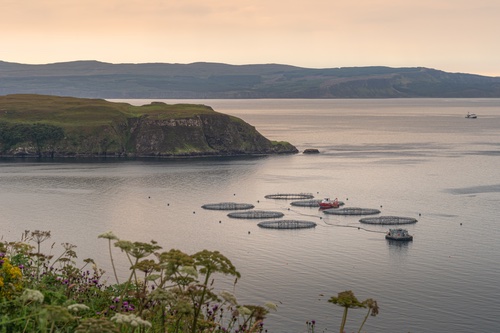 Salmon farms “should also be required to contribute to the enhancement of the local marine environment”, says the Green Party[Photo: Shutterstock/Kaca Skokanova]

The Griggs Report – recommendations for how Scottish fish farms are to be regulated in future –has been slammed and forensically pulled apart by wild fish bodies, writes Mark Bowler.

Independent reviewer, Professor Russell Griggs OBE, has submitted his Report to Mairi Gougeon, MSP Cabinet Secretary for Rural Affairs and Islands, who commissioned him to “review the existing evidence and engage with key stakeholders in order to identify the issues impacting on the efficient and effective operation of the regulatory framework for aquaculture from the perspective of industry, users of the shared marine environment (tourism, wild fisheries), communities and regulators; and make recommendations for further work in relation to improved efficiency and more fundamental institutional reform”. The Report was produced after the Rural Economy and Connectivity Committee (REC) had stipulated that “the status quo was not an option” when it came to further expansion of the industry with relation to its environmental effects, and to wild salmon and sea trout in particular.

Griggs’ recommendations include the creation of a central science and evidence base, jointly run and managed by industry and the Scottish Government, a central website of information on regulation, the introduction of a streamlined, single consent licence, which would cover the cost of all organisations involved in the consent process, and “adding value to local communities” through a process similar to Norway’s, in which a significant amount goes back to the communities “so that they can also benefit from the economic prosperity that the farms will bring”.

Griggs also recommends the Scottish Government should produce, within twelve months, a ten-year framework for each part of the aquaculture sector – finfish, shellfish and seaweed – within which all must operate. Any farms found wanting may be forced to close.
Salmon Scotland, the body that represents the salmon farming industry, welcomed the review, but fish-farm commentators warned that the report implied small inshore farms may be forced to close and it may result in larger farms being located further out at sea.
In setting out his review Professor Griggs claims he has produced a “sensible set of recommendations that will allow sustainable aquaculture development in Scotland”.

Central to the argument is the issue of ‘sustainability’, which both Mairi Gougeon and Professor Griggs both believe is possible for this industry in Scotland, despite other countries banning open net farming on exactly this issue. “Nowhere in the world has the goal of sustainable salmon farming actually been achieved”, say the S&TCS.

The Scottish government’s viewpoint that the industry must be allowed to expand is directly contrary to Recommendation 1 of the REC Committee which stipulated: “if the industry is to grow, the Committee considers it to be essential that it addresses and identifies solutions to the environmental and fish health challenges it faces as a priority”.

The Report also wants to see the removal of the ability of planning authorities to refuse permission for new fish-farms or existing fish-farm expansion, meaning councils will be relegated to the status of mere statutory consultees, he deduces.

He also highlights that the single licence for planning, which will entail a “rigorous” Environmental Impact Assessment or a Habitats Regulations Assessment but gives no mention of the Scottish Environment Protection Agency’s involvement.

Mr Graham Stewart rails against another of Griggs’ statements which defuses the ‘precautionary principle’ argument tabled by the REC Committee: “Two other things that good regulation has to do is to be enabling and not impede or prevent innovation. The latter can be impacted by harsh application of the precautionary principle or a regulators lack of knowledge of a sector or issue that makes them ultra-cautious”. This “enabling and not impede” flies in the face of Recommendation 40 of the REC Committee Report which stated: “although there is a lack of definitive scientific evidence of the various factors that are contributing to the decline of wild salmon stocks, the Committee is nevertheless of the view that a precautionary approach should be taken which will seek to minimise the potential risk to wild salmon stocks wherever possible”.

In addition, Recommendation 46 stated that “the Committee is of the view that a similar precautionary approach must be taken in Scotland to assist in mitigating any potential impact of sea lice infestation on wild salmon” and also Recommendation 48 highlighted that “the Scottish Government should provide strong and clear leadership in ensuring that the precautionary principle is applied, producing appropriate policy and guidance documents as necessary”.

Mr Graham Stewart is also concerned over Griggs calling for “allowance….special practices or derogations” for the fish-farmers.
“However much he may wish to, Griggs is not able to rewrite law, including international law and convention, upon which basis a precautionary approach is required for fish-farming as with any other industry which may damage or harm the environment”, he commented.

“The Scottish Government has made it crystal clear that it intends to allow and encourage the industry to expand – this will be irrespective of the harm that will be caused to wild salmonids. Nor is there any real intention to force the industry to deal with the existing negative impacts of open-net salmon farming”, summarises the S&TCS.

SNP’s Mairi Gougeon claimed “It is important that change to the sector is delivered in a practical way that reflects the co-operation agreement with the Scottish Green Party and our own manifesto commitments”.

Griggs’ Report emanated from an agreement between the Green Party and the Scottish Nationalist Party, which formed a coalition in August, and had specific pledges to aquaculture, including a vision and strategy for sustainable aquaculture; an immediate programme of work to better protect wildlife and the environment, including a response to the Salmon Interactions Working Group of September 2021; consultation on a “spatially adaptive” sea lice risk assessment framework for fish farms by the end of the year; strengthened controls on sea lice, wrasse and fish escapes in the course of 2021/22; and a commitment to ensure “that fish farming contributes more to support communities and recreational fisheries, to promote innovation and to support services such as fish health and welfare inspections and monitoring”.

Scottish Greens rural affairs spokesperson, Ariane Burgess told FF&FT: “The current regulatory framework for salmon farming is failing on every metric – the environment, local communities and the farms themselves.
“This report must be seen as an opportunity for change, including delivering greater transparency and a new social contract to ensure local communities benefit.

“This promise of rapid change is welcome, but the Scottish Greens will be seeking assurances that it will also deliver much stronger environmental standards that are transparent and backed by firm enforcement.

“We also believe that the industry should be part of our nature restoration efforts, and that, in addition to a social contract, farms should also be required to contribute to the enhancement of the local marine environment, which they will benefit from as much as local communities and the wider public.

“Our view continues to be that no further expansion of the salmon farming should take place until we have a regulatory regime that is fit for purpose.”

In summary, Griggs said that once the framework was in place that only the Cabinet Secretary would have the power to sanction change.