Location, intensity and scale of the main sea lice infestations on individual salmon farms to be mapped weekly 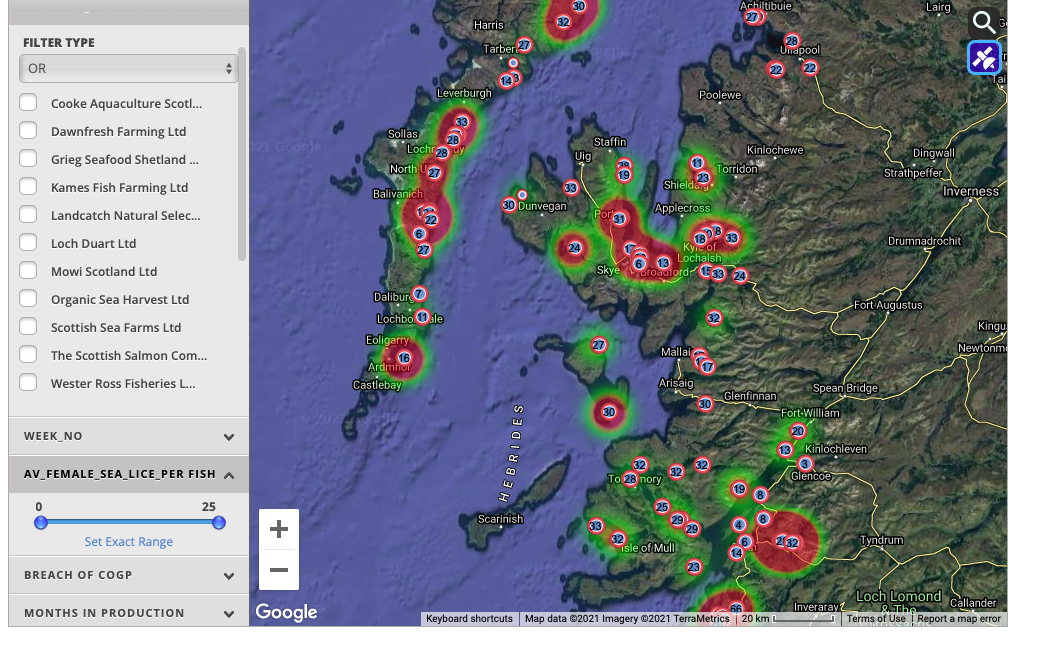 Sea-lice concentrations are mapped from SEPA data submitted weekly by the salmon farms.

In the battle to control sea lice numbers emanating from salmon farms, Salmon and Trout Conservation Scotland (S&TCS) has launched a new indicative geographical representation of sea lice emissions from Scottish salmon farms in the west Highlands and Islands.

In March, all fish farms were required by law to self-report their weekly sea-lice numbers. However, the data collected and then presented by SEPA (Scotland’s Environmental watchdog) is proving difficult to analyse, navigate and digest.

As a result, S&TCS has developed a real-time, sea-lice mapping tool which allows users to identify problem areas, watch where problems are developing, and trace the scale of emissions, in addition to identifying which farms and companies are responsible.

Due to the intensive nature of salmon farming on the west coast, the levels of sea lice carried on farmed fish can have a serious and detrimental effect on the wild fish that swim in the water in the vicinity of the farmed cages. Parasitised wild salmon and sea trout smolts (young fish) are particularly vulnerable to even small sea-lice burdens, and numbers of both wild species on the west coast have plummeted over the past three-and-a-half decades, mirroring the rapid expansion of farmed salmon farming on that coast.

Salmon farmers themselves face constant problems in controlling lice numbers on their stock. Even one or two mature female sea lice per fish within a set of cages housing hundreds of thousands of farmed salmon constitutes a rampant breeding reservoir, pumping huge numbers of mobile, juvenile sea lice infecting more stock, and also out into the local marine environment. The salmon farmers own ‘Code of Good Practice’ suggest levels of just 0.5 adult female sea lice on their fish in spring and early summer. Despite this, the ‘accepted’ lice limit by SEPA on Scottish farms is set a two adult female sea lice per fish, at which time the farm is duty bound to react and bring the lice numbers down, by reverting to chemical baths, hydrogen peroxide dips, treated food and other methods – such as the controversial ‘thermo-licing’ – but can do nothing to protect the infestation of the local, wild stock.

Andrew Graham-Stewart, Director of Salmon and Trout Conservation Scotland (S&TCS), said: “By shining a light on the main farms and areas of concern, the map should be invaluable in holding regulators, who are responsible for ensuring that salmon farms maintain sea lice numbers below specified levels but all too often turn a blind eye to breaches, to account. We also anticipate that the map will be indispensable for local wild fish interests, notably district salmon boards, which have statutory responsibility for protecting wild salmon and sea trout from the negative impact of salmon farms, particularly lethal infestations of sea lice.”

The map can pin-point individual farms and relate information about which company operates the site, the average number of female sea lice per fish recorded in the week, whether the Code of Practice has been breached, treatment details, numbers involved, and months in production.

Washington State, British Columbia and Denmark have recently made moves to rein in open-net salmon farming, appreciating it is unsustainable, and Argentina, mindful of what has occurred here and elsewhere, has banned open-net salmon farming from its waters. Scotland, however, continues to pursue its goal of doubling its output by 2030. The Scottish government told FF&FT recently that open cage farming “is and can be sustainable” (see January 2022 issue, News).

S&TCS intend to updated the maps on either a weekly or fortnightly basis. Weeks 13 to 45 of 2021 inclusive are now viewable at: https://salmon-trout.org/weekly-sea-lice-hotspots/