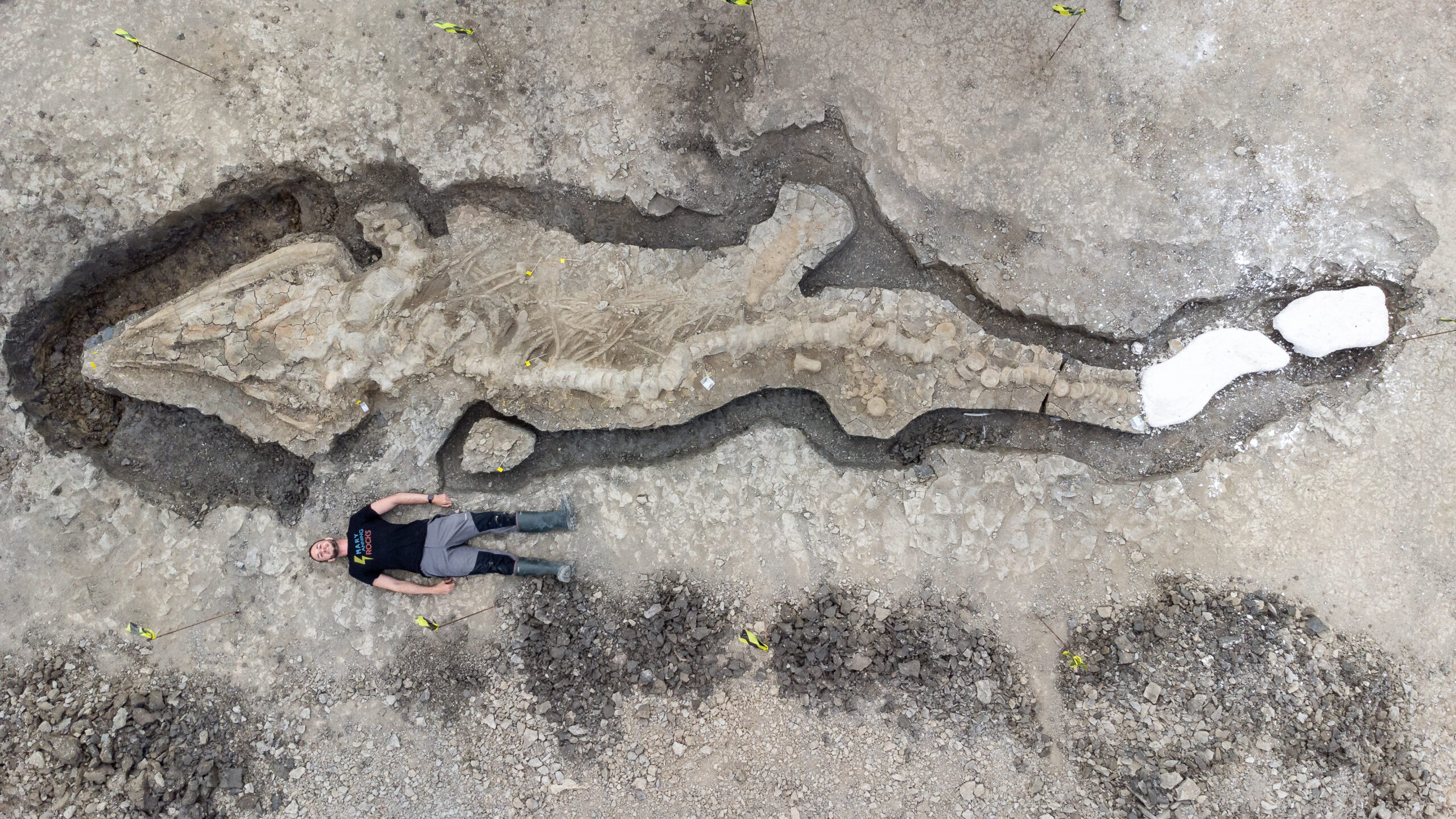 Many reservoir anglers tell tales of huge fish hooked and lost in Rutland Water, one of Europe’s largest man-made reservoirs. However, Joe Davis, Conservation Team Leader at Leicestershire and Rutland Wildlife Trust, has made a discovery in one of the wildfowl lagoons near Egleton, at the west end of the reservoir, that make anglers’ claims of ‘monsters’ seem somewhat puny.

In February 2021, draining of the site during maintenance unearthed a huge, fossilised skeleton. This has now been excavated fully by scientists and has been identified as Britain’s largest ichthyosaur, measuring ten metres long (33 feet), with a skull weighing approximately one tonne.

Now known as the ‘Rutland Sea Dragon’, it is approximately 180 million years old, and thought to be the biggest and most complete skeleton of its kind found to date in the UK. It is identified by palaeontologists as Temnodontosaurus trigonodon.  Ichthyosaurs were marine reptiles, shaped rather like huge dolphins, that varied in size from one metre to over 25 metres in length. Unlike the dinosaurs of the same period, they lived exclusively in the water and gave birth to live young. They first appeared on earth around 250 million years ago, but became extinct 90 million years ago.

The fossil was preserved in Rutland’s bedrock, which is Jurassic, spanning the period 195 to 160 million years ago. Rutland Water itself was formed back in 1975 by the creation of a dam at Empingham, but this fossil reflects a time of when Rutland was previously underwater. Rutland’s bedrock is entirely Jurassic in age and spans the period between about 195 and 160 million years ago. The fossil was found in clay-rich rocks dating from approximately 180 million years ago, during the Early Jurassic Period. Other fossils found with the ichthyosaur such as ammonites, distant relatives of squid and octopus, will help to date the find more precisely.
The very first ichthyosaur brought to the attention of science was discovered in 1811 and 1812 by Mary and Joseph Anning, in Lyme Regis, Dorset, along the Jurassic Coast.

More than 100 species of ichthyosaurs have been discovered worldwide, some with unborn young still inside them, but Ichthyosaurs this large and this complete are rare. Of the few large ichthyosaurs discovered in the UK, generally only partial or fragmentary skeletons have been found. Historically collected UK specimens also have poorly recorded information, with incomplete details relating to where they were found, and their age. The size and completeness of the Rutland Sea Dragon will aid in helping to identify other large, but much less complete, ichthyosaurs found in the UK that are already in museums.
If the identification of the ichthyosaur as Temnodontosaurus trigonodon is correct, this will provide new details on the geographic range of the species.

Weighing two tonnes, the Rutland Sea Dragon is currently in a conservation workshop in Shropshire, where the skeleton is being cleaned, conserved and mounted ready for research and display. 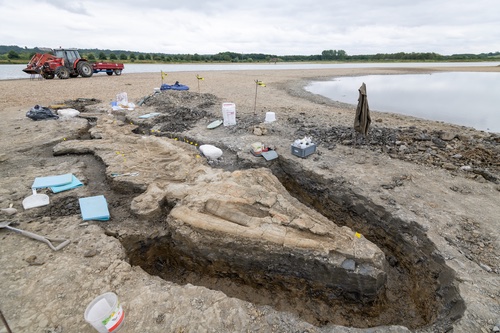