This pattern, designed by John Goddard, has become one of the editor’s favourite patterns, so I’ll let him take up the story behind the fly. The Super Grizzly Emerger first came to my attention when I started river fishing in earnest, ten years ago. However, it was a difficult pattern to find in the books. Although it is mentioned in the text of John Goddard’s excellent Trout flies of Britain and Europe (published in 1991) the full dressing is, tantalisingly, not given, and the flies – both its forerunner, the Super Grizzly, and the Super Grizzly Emerger – are not listed in the index. However, in Trout flies of Britain and Europe, the author lists the Super Grizzly Emerger as a good imitation of the duns of small dark olive, pale watery and small spurwing. Recognising that a fly covering a broad church might be a useful fly for when small olives were hatching, I first tied the fly as listed in John Roberts’ Illustrated Dictionary of Trout Flies (1995). I can only assume that the Super Grizzly Emerger was still earning its spurs in the early 1990’s, as when John Goddard produced Trout Fishing Techniques in 1996 it features in the chapter on the author’s most popular patterns.

Sure enough, in the text, he mentions fishing in Montana in 1988 and meeting Craig Matthews who with John Juracek, had just perfected their new pattern, the Sparkle Dun. One of the main and unusual features of the Sparkle Dun was its sparkle wool tail which represented the empty shuck of the hatching insect. John took the Sparkle Dun pattern home and used it great effect – particularly for grayling. Seeing a basic resemblance between his Super Grizzly and the Sparkle Dun, John merged the two ideas, replacing the micro-fibbett tail of the Super Grizzly (which he still uses to represent the large dark olive and medium olive) with some pale gold Krystal Flash as a shuck. He discovered this fly was an extraordinary taker of fish when dressed on a size 18 hook, and began to use it whenever small olives were hatching.

My first realisation of the benefits of this fly was on the Tay in early June, when faced with constantly rising fish in the crease water of a well-known salmon pool. Identifying what the trout were taking was difficult, as it was one of those balmy, early summer days when just about everything was on the wing. I went through my box of dry flies with rapidly decreasing confidence as various Olives, Yellow Mays, small Sedges, Black Gnat, Midges and various attractor flies were ignored with disdain by the rising trout. Merely irritated by my efforts to cover them, they didn’t even bother to stop rising.
I had probably changed flies seven or eight times when my eyes fell on the Super Grizzly Emerger in my box – its nondescript grey body looked like nothing I had seen on the wing, but I was just reaching the point of desperation; clutching at straws.

The effect was immediate. I see from my diary that, having risen nothing to any other fly, the Super Grizzly Emerger then accounted for six fish within a half hour, and continued to take fish for the rest of the day. I had learned a number of lessons. Firstly, the imitative powers of a grey-bodied dry fly. Although I’d read about the excellent qualities of the grey heron-bodied Kite’s Imperial during a large dark olive hatch, the flies I favoured during olive hatches were always ones of olive hues – the grey Imperial never did it for me, so I previously tended to shun grey-bodied dries when olives were hatching.

Secondly, the small day-flying sedges I’d seen that day were grannom. The autopsy I later performed on the fish I kept showed them to be feeding mainly on tiny (size 16 to 18) hatching grannom pupae – these fish were not feeding on olives as I had assumed. Thirdly, and not for the first time, I had learned the fact that in imitative fishing a simple change of fly can take you from despair to elation with just one cast.

Since that day, the Super Grizzly Emerger has always been a dry fly that I can turn to whenever I suspect the hatches John Goddard lists – small dark olive, pale watery and small spurwing – but I also would add grannom to the list, especially when tied with a dark grey fur body. As an added bonus, this is a fly I’ll turn to when I’m not absolutely sure what fish are rising to. There’s much of the Adams – the hugely popular general purpose dry fly from the States – about this pattern, with similar combinations of greys, grizzle and red game, but this is much easier to tie and probably gets across the stuggling, emerging insect message better. It is tied only in size 18, and I sometimes believe that it is this reason alone that accounts for its success – simply one of size. It is so easy in river fishing for an angler to ignore the smaller options and think big, especially if you can see bigger insects on the water or in the air. However, there are many instances on our rivers when sheer presence in numbers of the smaller insect mean the fish are almost totally pre-occupied on them. The day I mention here is typical; the fish had the pick of the hatches – olives, Yellow Mays, stoneflies, black gnats – but it was the tiny grannom pupae that they focussed on, and it was only the Super Grizzly Emerger that represented their image closely enough in both colour, size, form and attitude for fish to take it with confidence. 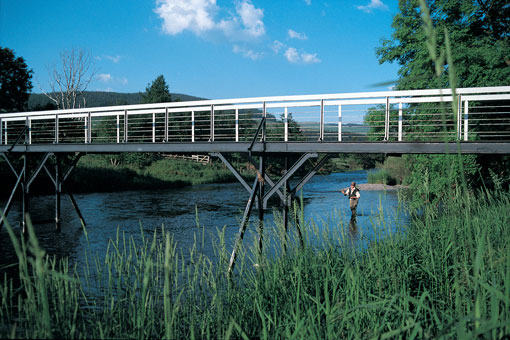 Fishing the Super Grizzly Emerger
This is a fly for light lines and light tippets. Only fished as a size 18, it requires nothing too tippy or powerful from the rod, so a four or 3-weight should suffice; I often fish it on a 3-weight. Fish it on a tapered leader and (if you are fishing a light line) don’t be afraid to go right down on your breaking strain. I use 1.5lb BS a great deal, but I do use a soft rod and I know that if I do contact a fish of 1.5lb then it’s a really good one, and I need to be very careful when playing it. With stiffish hackles and a small, light body, this fly will betray every minute influence of drag – and fish will subsequently ignore it. Use pile casts, reach casts, aerial mends, wiggle casts and even go for a longer leader – say moving up from 9-12ft – to help you win the angler’s unending battle against drag). Mending line upstream as the fly drifts down will also help.

Anglers often worry about seeing a dry fly of this minature size on the water. However, once you have grown acustomed to the light conditions, it can be surpringly easy to see a fly like this, even on roughish water. If you think you will struggle, make short casts and train your eyes in identifying and tracking the fly on the surface before making longer casts. Look for rising fish where the current begins to smooth out, down from the neck of the pool. A consistently rising fish holding station in the more even flow – ‘the crinkly water’ as Oliver Edwards eloqently describes it – of the pool is a potential candidate for the Super Grizzly Emerger.

The Super Grizzly Emerger is a great fly to offer fish that are beginning to bamboozle you. It’s general impressionistic look, colour and small size make it a great ‘all options’ fly which can bring about a result. If you see small olives hatching – probably any time after June – then this fly is worth a throw. You’ll notice small olives by them rising into the air from the river surface like a light-weight parachutist being carried upwards on a draught of air. However, if you see clouds of tiny day-flying sedges (any time from mid-April to June) give this fly a try – with luck, you may discover why it’s not simply called ‘Grizzly Emerger’.