Duncan Egan ties the useful Boar-bristle Shrimp and demonstrates how he fishes it in a special way. 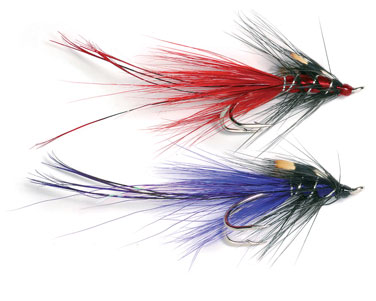 Movement within a salmon fly has always been seen as giving it an edge. It’s well documented that the best gillies of the old days would take a pristine, fully dressed salmon fly and rip a pin through the carefully married wing, and rub the fly between their hands, transforming its appearance in the water from a flat, two-dimensional coloured shape into a quivering, breathing blend of colour in a life-like form. The fly dressers of the time probably didn’t appreciate it, but the gillies of the time were experienced enough to be certain that the fish did. Over the years horns, hackles, palmer hackles, Arctic fox, even eagle feathers have all been used to supply those essential elements of tremor and pulse which suggests life in a salmon fly.

The use of pig bristles in flies was first brought to my attention by an article by Peter Whittingham (himself a gillie) who used pot-bellied pig bristles as feelers on his Shrimp patterns. One has to study the fly in the water to appreciate the qualities of this material; when used as a feeler it doesn’t just look the part, it also quivers with the slightest movement, either imparted by the rod or by the action of the current – the inherent movement sufficient to persuade an angler that it might just make the difference between a take and rejection.

Fuelled by confidence in the theory, the results add weight to the inclusion of this unlikely material: throughout Scotland mention of pot-bellied pig flies has become a common part of salmon fishing language and an increasing feature of catch returns. Since tying the fly I have used it extensively, and found it be a reliable pattern and somewhat of a favourite, particularly when conditions are not in the angler’s favour. Sometimes, in ideal conditions, after a spate for instance, a salmon will take almost anything that is presented to it, but more often than not when a river is low and no rain has fallen for a week or two, they can be much more fickle and fussy. It is during these times of medium to low flows that salmon fishing becomes an out-and-out challenge. In such conditions, I would turn to a Boar-bristle Shrimp fly, because if its extra powers of attraction when all else fails. The fact that Chinese wild boar bristles – a very similar animal to the pot-bellied pig – which are taken from the mane and ridge of the back of the animal, are now freely available in a range of dyed colours opens up the availability of the material and the pattern to all salmon fly dressers.

The pot-belly style of body adds to the shrimp shape of the fly in the water; this probably stems from the Francis series of flies which are built in this style and are now so popular in Iceland.

In further modifying the original fly, I have added a collar hackle at the tail and I use my jungle cock feathers larger – more like a wing. When judging the hackles for the fly, I tend to choose ones over-long, rather than tie them too short.

Tying the Boar-bristle Shrimp
• Tie on thread 6mm back from end of tube. Snip off waste thread.
• Take four fibres of wild boar bristles and tie on top of the tube so the tips extend well back past the end of the tube, curving upwards and high above the tube itself. TIP – When tying on tubes, I don’t use touching turns, as this tends to squeeze fibres rather than grip them onto the surface, and they can pull out. You will get a much more secure binding of the material if it is tied down by using open turns, which lock the material down at a variety of points.
• Snip off the tips at the head.
• Take a small bunch of bucktail and half a dozen strands of Flashabou. Level the tips of each. Judge for length, they should fall just short of the boar bristle tips.
• Take an orange hackle and tie in by the stem, shiny face outwards, just in front of the tail.
• Fold over the fibres as you wind the hackle. Make three turns, catch in, and trim.
• Funnel the hackle fibres back and wrap turns over the roots to persuade the fibres to incline backwards. Take the thread back to the head, in open turns wind back to the hackle root.
• Whip-finish and snip off the thread.
• Tie on floss (floss is spooled on a bobbin) at the head.
• Run floss down to the hackle, up to head, down again, always making more turns towards the back of the body to form a carrot shape, with the ‘top’ of the carrot being at the rear. TIP – Remember you will not be able to build a sharp edge to the back of the body – the floss turns will simply collapse and slide off into the tail. Also, leave plenty of space at the head. To get the desired shape with the floss make touching floss turns towards the back of the fly and use very open turns at the front; this way, you can build the desired carrot profile.
• Whip-finish the floss and trim.
• Tie on the thread at the head, Cover the whole head space with thread.
• Take a black cock hackle. Tie in the stem at the head, where the body starts. TIP – Tie down the first two fibres on the stalk as well as the stalk – this will afford more grip and prevent the hackle slipping.
• Trim stem, wind a palmer hackle, pulling the first turn of fibres forward as the second turn is made. Having made three palmer turns, make a single turn of the rib to form a butt then come forward with the rib, trapping the hackle down. Catch in the rib at the head.
• Force the hackle fibres back using thumb and forfinger pressure.
• Cut out the top-most fibres of the palmer, to allow the jungle cock to sit as a wing.
• Twin jungle cock feathers are matched for size; they should be the same length as the body.
• Tie in one at a time, tying down at the third white band of colour on the feather.
• Make more turns to secure, then snip out the excess tips.
• Build a head, whip-finish and varnish.
• Having completed the fly, roll it around between thumb and forefinger to force all the fibres back.

Fishing the Boar-bristle Shrimp
When fishing this fly, remember that action is the key. This action can be imparted either by the current (in faster flows, say, at the neck of a pool) or by the rod. ‘Tipping’ the rod – nodding the tip of the rod to produce a pulsation of the fly fibres as it swings round – is, I’m convinced, responsible for increasing the efficacy of the pattern. This gentle, rhythmical bouncing of the rod is especially useful in slower glides and flows. Similarly, when the fly swings off the main current and into slacker water, the extra life of this fly can, I’m sure, keep a following fish sufficiently interested to get it to take. This is in contrast to other, less mobile, more rigid salmon flies which can ‘die’ as they swing off the current, resulting in an interested, chasing fish ultimately ignoring the fly, turning away, and returning to its lie.

I have used his style the fly on the Tay, Tummel, Spey and Lochy, but I have heard of the pattern being successful on a wide range of our rivers from both the north and south of the country. Tie it in the usual favourite colour styles, but remember that the purple version is well worth a try in low, clear water. Try a Boar-bristle Shrimp when river conditions have, once again, fallen in favour of the salmon – you might just be surprised.

3 tips for tying the Boar-bristle Shrimp: 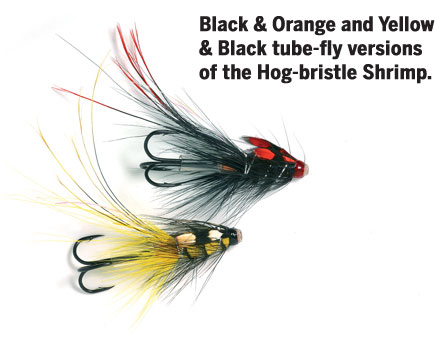