One of Europe’s finest poets was Aberystwyth’s Dafydd ap Gwilym. He lived in the 14th Century and wrote with passion about the beauty and pleasures of the countryside. His love of nature and his close affinity to wild animals is strongly reflected in his writing – in fact he wrote a poem to the bold salmon, asking it to act as his love messenger and to go to the bedside of his mistress and tell her of his undying love for her. To him, and to all lovers of the great outdoors, each month of the year has its appeal but in Dafydd’s eye the merry month of May outshone the rest and he describes the flora and fauna in May as being at their most colourful and active. Poetic licence? Maybe. However, there is no doubt that the aquatic environment is very productive in May and we all know it is a great month for anglers. There are those who believe that Welsh angling is at its best then. The rivers are in top form, the reservoirs are ‘on song’ and the mountain lakes are at their best. 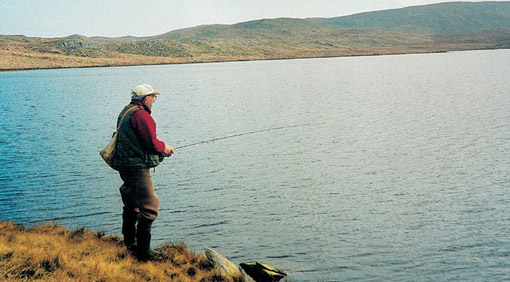 Early runners
In May, Welsh rivers will have had their first influx of big sewin, those silver jewels, those children of the tide, who leave their childhood and the tidal reaches to move upriver.

May certainly becomes a very merry month for nocturnal anglers who go out to chase the sewin in darkness, but we have to wait until the holiday months of July and August for them to increase in quantity.

One of the most efficient big sewin anglers in Wales is Malcolm Edwards. Like Dafydd ap Gwilym, he is an Aberystwyth man, and Malcolm always kicks off his sewin season on the River Rheidol in May. The Rheidol is a very much under-rated river for big sewin, but Malcolm and many other keen sewin fishers always begin their sewin fishing proper in May, irrespective of the water level or any other climatic factor.

Serious sewin fishers know their rivers well, and therefore know which pools in their favourite river hold the early sewin and they do not waste any time or effort fishing pools that don’t hold them. Some pools are known to be exceptionally good for holding early sewin, while other pools that are good holding pools in summer, do not. It is this intimate knowledge of time and location of when a pool becomes productive that is so important – far more important than those other factors which we so readily discuss, such as choice of lines, flies or speed of retrieve.

Tracking May sewin
15 or so years ago, officers of the National Rivers Authority carried out a very interesting experiment on the River Tywi with the aim of learning more about the running patterns of sewin once they left the tidal reaches and entered the river course.

The sewin were initially caught by seine netters in the estuary and tagged with radio-tags. As the sewin moved upriver they were carefully recorded and monitored by radio receptive stations located intermittently on the river bank, up as far as its source.

What the experiment proved was that sewin, like humans, vary in their behaviour patterns. In May they would move up to their favourite locations in the river course and take up residence in certain pools. Some of these favoured pools would be just downriver of the main tributaries. These pools were the hot-spots for river-anglers to fish in May. The sewin of May were not given to racing upriver in top gear. Their movement would always be deliberate and sedate.

Best in May
The River Towy is one of the best rivers in Wales for the quality of May sewin. The lower beats and upriver as far as Llandeilo are the haunts of the May sewin with the Nantgaredig area being the most favoured area.

I recall the time when I had a permit for a number of years on the Cawdor beats and it always provided excellent sewin fishing around mid May. My mentor at the time was Glyn Davies and, as he was family, I spent a lot of time with him.

Invariably, I used the minnow. Cast upriver and reeling it back in a curving path. Devon minnow, especially the Reflex one, and home-made Quill Minnows and later the Lane or Irish Minnows were the favourite offering.

From the mid 60’s to the early 80’s, the sewin stocks were probably at their best ever. The most popular flies were Dai Ben, Towy Topper and Teifi Terror. The fisher who gave his name to the Dai Ben fly was David Benjamin of Abergwili – Dai being a Welsh abbreviation of David and Ben being an abbreviation of Benjamin. He had been given the fly by a coachman at the Cawdor estate and sent it to the Cummins fishing firm to dress for him.

I spent some time with him and learned of his approach to sewin fishing. He was a practising conservationist of sewin stocks, even back then in the 70’s. He used a Cummings 11ft cane rod, which, I believe, was called Grey Goose, or something similar – in fact, he put a lot of faith in Cummings. He was indeed a great fisherman and enjoyed fishing the fly for sewin.

Many May sewin are taken on spinners, especially if the rivers are in good condition. At one time the quill minnow or the Irish minnow always gave good results and hence were very popular with both fisher and fish. Home-made quill minnows correctly weighted were also in great demand – but the art of fishing the quill minnow is somewhat lost today, as the Rapala has replaced it.

It is always interesting to note how some sewin anglers on certain rivers developed into experts in one particular form of fishing. Some of those experts in those halcyon days made exceptional bags.

May and the wild lakes
May is also a great month in Wales on stillwaters and even more so on the mountain lakes. The wild brown trout seem to be at their best in places like the tranquil Teifi Pools near Tregaron, Aberystwyth’s Nine Lakes, the lakes around Caernarfon managed by the Seiont and Gwyrfai and Llyfni angling club and the 20 or so Cambrian lakes around Blaenau Ffestiniog. These quiet retreats produce quality wild brown trout fishing. Wild brownies, although not big, provide the best sport when their eyes are looking towards heaven for the daily manna. In recent seasons the early arrival of the coch a bonddu beetle has given sport of prolific quality. In recent years the coch a bonddu has been seen quite early on some fisheries, and one wonders if this is because of climate change, or because of the schemes to farm and enhance the heather growing on the hills of mid Wales. The early arrival of the ‘coch’ on a few of the more remote mountain lakes has been a bonus for fishers.

To reach the mountain lakes on foot is often very demanding physically. Some anglers used to visit these remote areas using 4×4 vehicles, but recently certain restrictions have been placed on the use of 4x4s, especially in some sites of special interest.

When fishing highland lakes, the old Welsh style of two steps and a cast while working your way around the lake is very effective. In this way you can be sure of covering many a hot-spot where flies are hatching and the fish are feeding.

We have gone full circle and are back to the tranquility of great outdoors and the delightful month of May. No doubt other poets have written about the joys of being in the countryside in May, but to me it was Dafydd, and he alone, who gave the image such dignity. Dignity, I hear you say? Yes, indeed, dignity. Through his writing he certainly gave the great outdoors a certain aura which is akin to dignity.