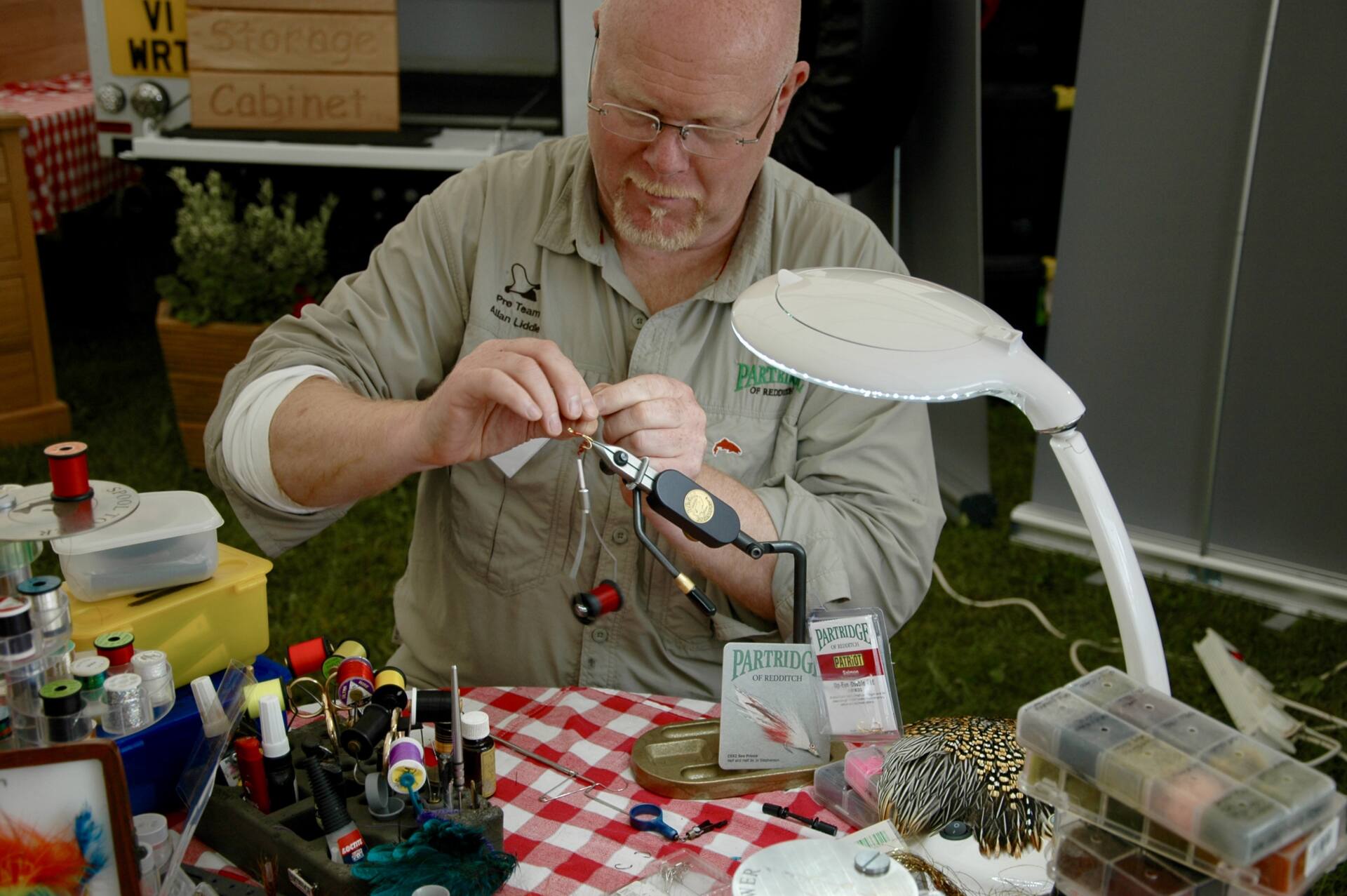 Allan Liddle heads up a band of 12 fly tyers who will be demonstrating in FF&FT’s Fly Fishing Mall.

Allan Liddle heads up a band of 12 fly tyers who will be demonstrating in FF&FT’s Fly Fishing Mall at Scone, during the three days of the Scottish Game Fair in early July.

Allan has been a regular contributor to Fly Fishing and Fly Tying magazine for over 20 years and a ‘well-known face amongst anglers all over the UK and beyond.
With a passion for Scottish brown trout from the wilder places Scotland has to offer, Allan travels throughout the country and the Outer Isles regularly. Despite this being his true passion, he also regularly fishes for stocked trout when the opportunity arises.

His other fly fishing passions find him regularly searching sea trout (and other salt water species) in the sea around Scotland, salmon in the rivers, and even the occasional foray in search of pike.
As a fly tyer, Allan regularly attends shows throughout the UK and abroad and is a Pro-team member of both the Partridge of Redditch and Semperfli brands. Occasionally, Allan takes clients out on river or loch as a guide, and is a GAIA qualified instructor and former Scottish Internationalist, having represented his country on a few occasions in the past.

The fly-fishing bug engulfed Melvyn about 25 years ago when he was in his mid-30s. Like many other fly anglers from the industrial north of England, he started his journey on small, stocked stillwaters, fishing for rainbow trout. His fly tying started at this juncture, tying lures and Buzzers. He soon became involved in the competition scene, which changed his interest to large stillwaters, and fishing loch-style. He was lucky enough to be a member of the 2002 England loch-style team. He was also lucky enough to visit Rob Tye’s shop on the shores of Lough Mask in Ireland, and was pleased to have met the great man – who was a gifted dyer of materials – just months before his untimely death. He could not believe the shades and blends of colour the Irish tyers use, but he now incorporates these blends into his own flies – which are largely influenced by the Irish style. He also fishes all over Scotland, from Perthshire to the Outer Hebrides and Orkney, in search of wild fish, particularly loch fishing for salmon and sea trout.

As far as the fly tying goes, he ties all types of flies. From classic salmon flies – which he has a love-hate relationship with – to the simplest of lures. His passion is for tying lough flies in the Irish style. He is also a member of two branches of the Fly Dressers Guild – Pendle and Leeds – and in Leeds he also teaches the beginners’ class – something he really enjoys.

Former Scottish Anglers National Association (SANA) President, founding Director of Angling Scotland Ltd, international angler with multiple caps and occasional angling author, Archie has been fly fishing and fly tying from the age of thirteen.
His passion for the sport grows daily, and he prides himself in the notion that he still knows too little to give up learning just yet.

Introduced to fishing at a very young age by his father, Richie was tying flies by the age of 11. That’s been a long 28 years fishing for rainbow trout, brown trout and – he hopes – this year, a lot more sea trout. He has tied and tried so many types of flies over the years. Anything “new” or re-discovered that comes along… he must tie it. A new material? He feels the need to use it. An addiction, perhaps. A fully paid up member of Fly Tyer’s Anonymous which he believes has a huge membership!

Started fishing at the age of 13 with his late father on the river Eden, in Fife, where a 3/4lb brownie was a monster! Moved on to fishing for rainbows at places like Loch Fitty, sadly no longer fishable. When work took him to Elgin he became a regular at Glen of Rothes and Forgue. Work then took him to Inverness 26 years ago and, with kids on the scene, there was a decade where he never cast a fly. However, once he regained the bug, he started his journey with salmon, fishing the Ness, Findhorn and Thurso with the odd trip to the Spey and Tay thrown in.

In 2022 he’s decided to go back to his roots and target trout again. An avid, self-taught, fly tyer since the age of 14, there’s nothing he loves more than sitting at the vice and thinking up new ideas for flies.
He’s had the pleasure of hosting fly-tying classes for kids with the Inverness Angling Club and is delighted that these will happen again this winter, having been cancelled for the last two years due to Covid. Always delighted to pass on his knowledge to anyone willing to listen!

Has many childhood memories of fishing with friends and family and, in 2006, was introduced to the world of fly fishing by his older brother. His passion for tying flies started soon afterwards and, being self-taught, he continues to learn the art of wrapping fur and feather onto a hook to tempt the fish of our piscatorial dreams. I
He started fly fishing in his local river for wild brown trout, then moved onto stillwaters for stocked rainbow trout, and joined a private loch. Due to ongoing health issues most of his enjoyment now comes from hearing the stories from friends that have caught their personal bests or had red-letter days fishing with flies that he’s tied for them.

Dave Felce, aka “Corsican Dave”, has been fishing since childhood; now a very, very long time ago. Cutting his teeth on the canals and clay pits of Milton Keynes (the well-known Mecca of fly-fishing), he first picked up a fly rod around 40 years ago. He promptly attached his trusty spinning reel and wondered why it didn’t work very well…

Things have moved on a bit since then and Dave has been actively pushing the boundaries of fly-fishing for many years with wide experience in saltwater fly fishing, kayak fishing, pike on fly and, most importantly, carp; both in the UK and abroad. He primarily uses imitations of natural food items and bases his approach on observation and experimentation, although his patterns range from simple to outrageous!
Brimming over with passion and enthusiasm for his subject, he has had a number of articles published and has presented talks at various shows, including the BFFI.

An Applied Biologist (somewhat lapsed) and a qualified outdoors instructor, he now concentrates on adventurous fly-fishing, writing and photography.
He is the Brand Ambassador for Gouldfish Custom Rods.

Graeme Keir is a southern based Scottish fly fishermen and avid fly tyer. Well known on the scene for top quality flies for rainbows and wild Scottish browns, Graeme loves tying flies that try to break the mold, whether it be putting modern twists on classics and using water-craft to come up with patterns that work very well and have been very successful. He travels far and wide to pit his wits against some of the most beautiful fish imaginable. Wild browns are his main quarry and give him loads of satisfaction, whether it be southern Scottish browns or some of the stunning Highland trout he pursues. Tying is a massive part of his armoury, and with dedication and perseverance his results speak for themselves. Graeme represents Stonfo, Ahrex and Fishers Direct brands.

Paul Black has been fishing for 25 years and tying flies for 20 of those. Wild brown trout, sea trout and salmon is where his passion lies. Loch-style wet flies, Muddlers and salmon flies are his speciality, but he has the utmost confidence in tying most styles of fly. Not your usual fly dresser, Paul likes to push the boundaries on what most tyers are taught to do. He refers to his style of tying as unorthodox. Scottish hill lochs and deep in the wilderness is where you will find him, or along the river bank chasing silver. He recently began contributing to Fly Fishing and Fly Tying magazine, sharing his thoughts and experiences with the readers.

Brought up in the Scottish Borders with the river Tweed on the doorstep, Cuillien took up fishing when a teenager and developed and learned skills from a few anglers in the local fishing club. He also gave the fly tying a go, and really enjoyed the creative side of that. He worked for Orvis in Kelso for a couple of years and also Edinburgh Angling Centre, where he learned more about products and got to experiment with the latest tackle. This has all taken him towards his dream job: full-time fishing guide with Alba Game Fishing Limited. He also fished in the Scottish National Fly Fishing League for a few years and is currently in the Premier Division. In 2018, he fished for Team Scotland in France in a European Competition, and this year will represent Scotland in the World Fly Fishing Championship, which will be held in Asturias in Spain, in September 2022.

Ian fishes the stillwaters of Central Scotland and is always on the look out to tie the latest patterns that are fooling the trout. Easy to approach, Ian has demonstrated fly-tying at Scone for a number of years, and also appeared at the BFFI earlier this year.

Conan Fyvie
Grew up fishing with his father in the 70s. Fly fishing became his hobby in the 80s and he began tying around 1986. The remote hill lochs of the Highlands and Islands are a passion of his.
Traditional Scottish and Irish wet flies are Conan’s ‘go to’ favourites. Dry fly fishing and imitating the flies with semi-realistic patterns is a more recent passion, as is salt water fishing, and pike on the fly. Always inventing new creations, Conan says it is very pleasing when your fly fools a wild brown trout.